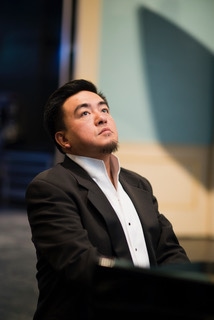 Yi Wu is an international piano virtuoso. He has garnered critical acclaim with his spectacular appearances as a recitalist and as a featured soloist with major orchestras throughout Asia, Europe and North and South America. Currently, Mr Wu resides in Dallas, Texas where he has recently been appointed as a director of the international music program at Zhen Music and Arts. During the past two decades, Mr Wu has taught many piano masterclasses from China to Russia, and from Canada to Germany. His creative style of teaching has changed many young pianists’ views on life and music. Early in his career as a concert pianist, Mr Wu successfully competed in a number of international piano competitions. He was a first prize winner at the inaugural Esther Honens International Piano Competition in Calgary, Canada in 1992. As a result, he was on Columbia Artist Management pianists roster.  He has appeared on many concert stages around the world, such as those in Munich, Hamburg, Los Angeles , London, New York and Shanghai. Mr Wu is a Steinway artist.